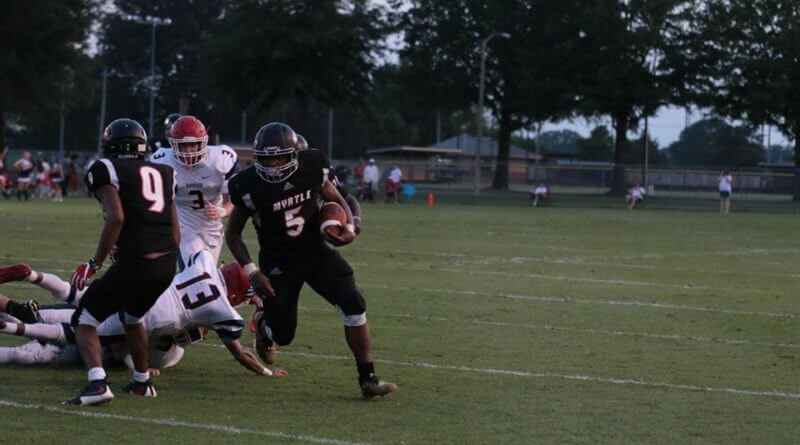 MYRTLE- In year one of varsity football, struggles are expected and seem to come with the territory for programs like the Myrtle Hawks. A first-year program that finishes .500 is surprising, usually. However, teams that rattle off seven straight wins after losing their first is simply astonishing. Coach Justin Hollis was able to accomplish exactly that with only a loss to East Union keeping them from an unblemished record.

While Coach Hollis has moved on to become the principal of Nettleton High School, defensive coordinator Jeremy Smithey slides into the head coaching position and returns plenty of talent alongside him.

The most obvious production returning is A.I. Nugent, who rushed for 1,851 yards and 27 touchdowns, averaging eleven yards a carry and 231 yards a game. Incumbent quarterback Jaden Taylor also returns to bring stability under center for the Hawks. While he only attempted sixty passes as a freshman last year, he will be expected to put the ball in the air more to relieve the pressure off the potent run game.

Taylor will have a repertoire built with his receiving corps this year, as leading receiver Elijah Thompson and every Hawk who caught a pass last year returns in 2019. Myrtle only scored three times through the air, so this unit will look to produce more than in 2018.

J.T. Hudson graduated last year as the leading tackler for the Hawks, but Nugent, alongside Andrew Phillips and Gabe Medlin, return as the other leading tacklers of this unit. Phillips also lead the defense with three sacks last year, surely looking to increase that number as a junior.

Myrtle opens the season on the road against Vardaman, and then gets its first home game of the season against county rival East Union. The Hawks first major test of the season comes in their first division battle in school history on the road against the Biggersville Lions. The end of the regular season will be marked by a home tilt against the newly-appointed 1A Baldwyn Bearcats. If Myrtle can reproduce the production and magic of 2018, the first playoff-eligible season in school history just may be marked with a postseason birth.