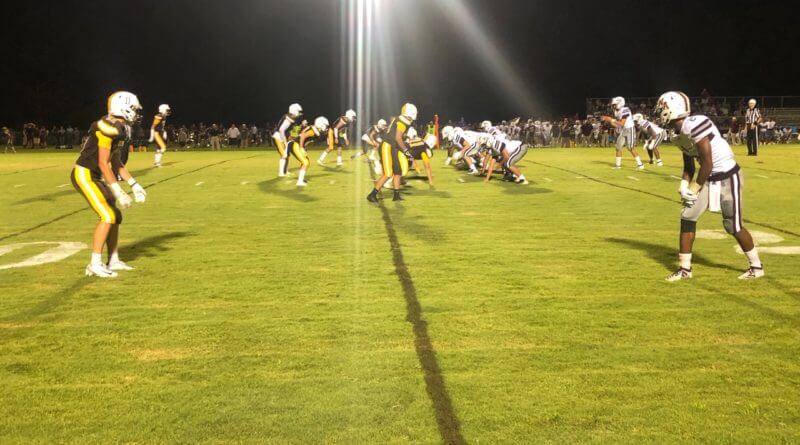 BLUE SPRINGS- Week One usually is tricky for teams as they try to weed out mistakes. While both teams will have plenty to fix heading into week two, the New Albany Bulldogs showed much more discipline and potential in a 40-7 beatdown of the East Union Urchins on their way to their third consecutive EUNA Cup.

The Urchins received the ball first, and only two plays occurred before the first of five East Union turnovers as they coughed up the football in their own territory. The Bulldogs drove all the way down to East Union’s four-yard line before a goal-line stand w=kept both teams scoreless after one drive.

However, the next drive one team struck quickly. Ty Walton tried to stretch to stretch the ball down the middle of the field, resulting in Mason Simmons intercepting the pass and taking it to the house for the first Bulldog touchdown of the season. New Albany scored yet again two drives later; this score came from a sixteen-yard run by Charlie Lott to extend the lead to 13-0. The Urchins punted the ball back after three plays, and Simmons returned it 33 yards to set up a one-play drive where Lott would hit Isaiah Cohran on a 35-yard screen pass to put the lead at 20-0 after one.

New Albany proceeded to take every bit of momentum in the game by finding the endzone on all three second quarter drives to take a dominating 40-0 lead over the seemingly hapless Urchins. However, East Union finally produced some offense with Colton Plunk running the ball downhill with no receiver out wide. Plunk scampered into the endzone with 23 seconds left from six yards out to make the score 40-7 heading into the halftime break.

After dazzling performances by the New Albany and Union County Schools Bands, the second half began, and it was simply a run out the clock situation. The game clocked ran without stoppage the entire second half, with only five shared drives between the two teams. Neither team scored for the whole second half, and the Bulldogs once again claimed a rivalry win over East Union.

Lott did exactly what was needed in his first game as a starter, going four for nine with 89 yards and two touchdowns, along with an interception. Simmons dazzled for the Bulldogs as well with the pick six and a touchdown reception in the second quarter. For East Union, Walton would go 12-25 with 106 yards and two interceptions, not being aided much behind a shaky offensive line performance and many drops. Plunk seems to be the x-factor in this offense, carrying the ball six times for 78 yards and a score. He also caught two passes for thirty yards.

The win put New Albany at 1-0 heading into next week’s showdown with Itawamba Agricultural High School on the road next week, and East Union drops to 0-1 with a intercounty rivalry game and first-time matchup against the Myrtle Hawks at BNA Park on Friday.