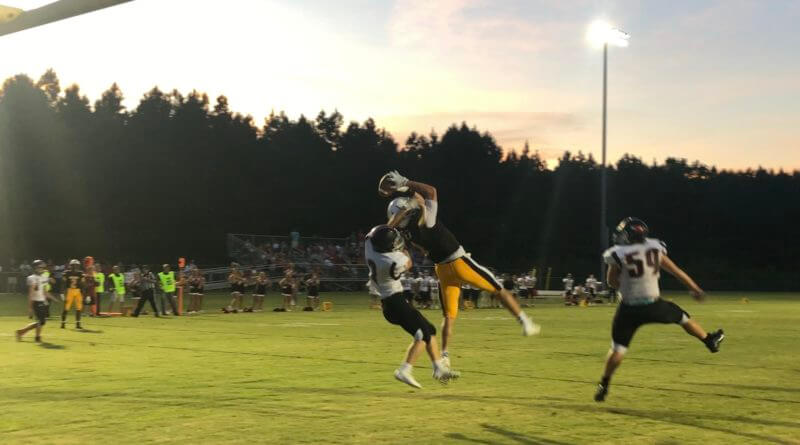 BLUE SPRINGS- The first game of any series will be remembered for years to come. In a inter-county rivalry playing the first game ever between the two, it sets the stage for bragging rights for next year and even longer. A lopsided victory like this one will stay on the mind of players and fans alike, as well as the East Union Urchins dominated the Myrtle Hawks 61-19 last Friday night.

The Urchins received the ball first and went to work in two minutes and forty-one seconds on a eight-play drive that was capped off by a fourth-down touchdown pass from Ty Walton to DeJuan Hubbard from seven yards out. Myrtle immediately coughed up the football on their first offensive play of the night, which allowed East Union to quickly build a two-touchdown lead on a fifteen-yard run by Colton Plunk. After a blocked punt near the end of the first quarter, Walton found Plunk on a jump ball in the end zone to extend the lead to 20-0 as the first frame closed.

Early in the second quarter, the Hawks forced the Urchins to turn it over on downs, which yielded decent field position and a bit of momentum. Elijah Thompson took advantage and led the offense down the field, scoring on a 27-yard run to cut the deficit to 20-7. East Union proceeded to fumble in Myrtle territory, which allowed star running back A.I. Nugent to finally leave his mark with a 61-yard dash towards the end zone to bring the game to one score at 20-13.

Plunk stepped up on the next possession when momentum was low and scored on the first play of the drive on a 41-yard run down the left sideline to extend the Urchins’ lead to 26-13 after a failed two-point conversion. Myrtle went three and out, which forced a punt that would be returned 48 yards by Hubbard. Right before halftime, Walton threw a dime to Hubbard from 32 yards out and found Plunk on a two-point try to make the score 34-13 at half in East Union’s favor.

Myrtle opened half with a seven-play drive that ended with a punt, which allowed the Urchins to seize all the momentum with a 32-yard pass from Walton to Hayden Roberts to make the score 41-13. Nugent would not go quietly, however, as he broke off another long touchdown run of 54 yards to cut the gap to 41-19. Sadly for the Hawks, the next drive essentially sealed it with a 89-yard catch and run from Walton to Hubbard to extend the lead to 48-19 to end the third.

Myrtle drops to 1-1 on the season with a home matchup against Marshall Academy on the schedule for next Friday. East Union improves to 1-1 after the huge win with Ashland coming into town next Friday as well.