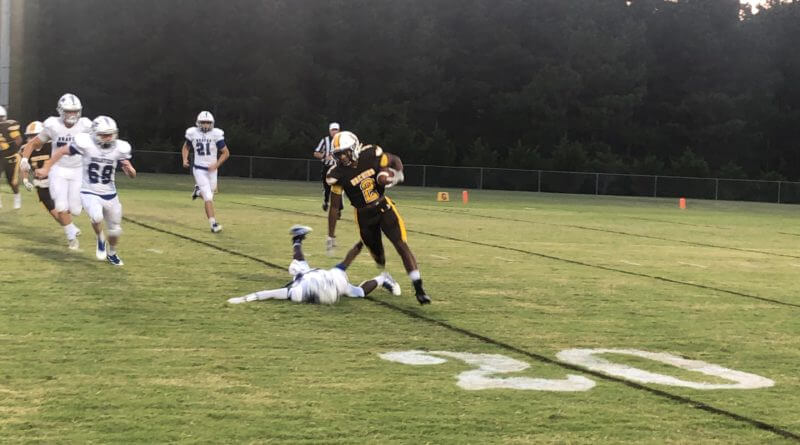 BLUE SPRINGS- The first Friday night of the 2019 season that actually felt like fall football led to a triumphant victory for the East Union Urchins at home over the Tishomingo County Braves by a score of 48-10.

The Urchins struck quickly and emphatically with Colton Plunk blazing down the sidelines from 74 yards out to give his team a 6-0 lead after a missed extra point. Tishomingo County proceeded to drive into enemy territory, but a long return on an interception set up a Ty Walton touchdown pass to DeJuan Hubbard from 26 yards away to extend the lead to 14-0 following a successful two-point conversion.

The Braves drove into Urchin territory two drives in a row, but a turnover on downs and missed field goal yielded no points. East Union capitalized on the mistakes, and Walton found Hayden Roberts from six yards out to extend the lead to 20-0 after another missed extra point. Tishomingo County took advantage of a Urchins fumble and nailed a 41-yard field goal with six seconds left to cut the defecit to 17 at the halftime break.

With the Braves looking to make an comeback in the second half, the first drive yielded the exact opposite result needed, as the Urchins blocked a punt and returned it deep into enemy territory. From there, East Union scored in one play as Micah Fulgham ran it in from 10 yards out to make the lead 28-3.

East Union would not stop there as, later in the third quarter, Walton took his offense 96 yards down the field and found Fulgham on a 10-yard touchdown pass to make the score 35-3. While Blake Counce got the Braves in the endzone on a ten-yard pass to Tyriek Duckett, the Urchins scored twice more in the fourth quarter to dominate Tishomingo County by a final score of 48-10.

With the loss, Tishomingo County falls to 1-3 and hosts Lewisburg for Homecoming next Friday. As for the East Union Urchins, they move to 3-1 and play host to East Webster next Friday in what may be one of the best games in North Mississippi next week.