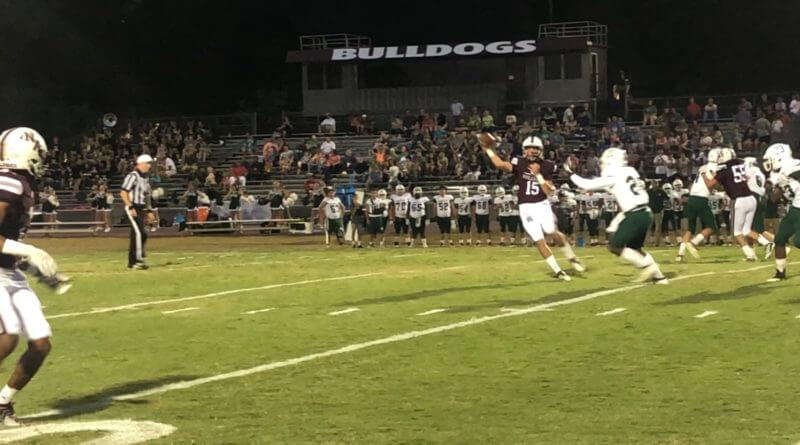 NEW ALBANY- After all that went down last Friday night, there is simultaneously a lot and not much to talk about. So, in a very heated and chippy game, the New Albany Bulldogs protected home field with a 38-7 win over the Mooreville Troopers in a crazy ending.

The Bulldogs got started quickly forcing a three-and-out, and it seemed that Mason Simmons took the punt all the way back to the endzone. However, a flag brought the return back to the 17-yard line of Mooreville, but Charlie Lott began his fantastic night with a 15-yard touchdown pass to Isaiah Cohran on a run-pass option to the right side of the field.

Mooreville quickly responded with a 41-yard completion, which led to an easy one yard touchdown run by Dawson Phillps to tie the game up at seven. The game seemed to be heading towards a shootout; however, both defenses tightened up to prevent either offense from doing much at all.

On the final drive of the first half for the Bulldogs, a prior interception set up a short field for the offense, which Lott took advantage of by diming up the Troopers’s defense with his second touchdown pass to Cohran from 25 yards out. This allowed New Albany to take a tight 14-7 lead into halftime over Mooreville.

Once the second half began, it was all Bulldogs the rest of the way out. A 33-yard field goal opened up the third quarter and gave New Albany a 17-7 lead. The very next offensive possession after an interception, Lott led the offense down the field in ten plays and topped it off with his third touchdown pass to Cohran to give his team a 24-7 lead.

Immediately after the touchdown, a Mooreville player took a shot at Cohran while celebrating his score. This lead to a bench-clearing brawl in the top left corner of the endzone and yielded a combined eight ejections, comprising of both Bulldogs and Troopers.

Even after what amounted to a twenty-minute stoppage after the fight, Lott and the New Albany offense did not miss a beat with another Lott touchdown pass and a Carl McKinney touchdown run. Facing a 38-7 deficit, the Mooreville team decided to leave the field of play with 8:24 left in the final quarter in an extremely bizarre ending.

After the game, Coach Cody Stubblefield was “excited about the effort our guys gave on defense tonight, and whenever you forced turnovers like we did tonight, we’re excited about that.”

The defense came up big, forcing four turnovers, and complemented Lott perfectly, who finished 20-31 with 168 yards and four touchdowns.

This moves the New Albany Bulldogs to 4-1 on the year, welcoming Amory at home next week in the final non-division game of the 2019 season.