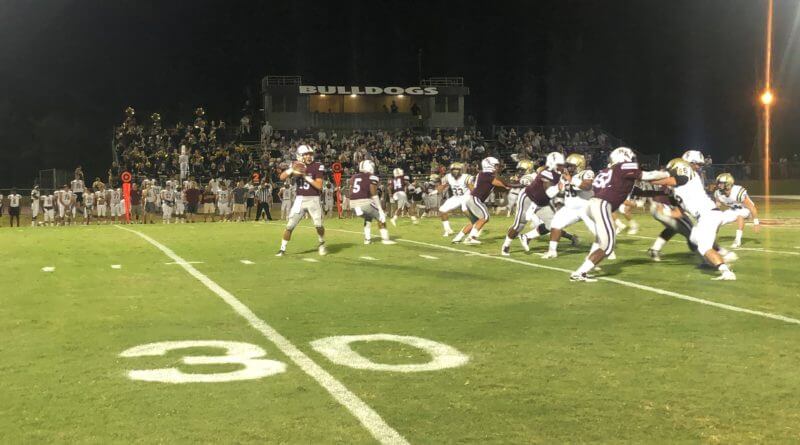 NEW ALBANY- Any coach in high school football how important the final non-division game is for their team’s readiness for the division grind towards a hopeful playoff spot. While both teams will surely need to tune a few things before this coming Friday, the Amory Panthers will surely have a lot of confidence after their 35-14 road win over the New Albany Bulldogs.

The first four drives would feature punts on every drive, including two three-and-outs. Amory got the ball back with a little under five minutes left in the first quarter, and Hunter Jones began his phenomenal game with a five play drive, concluded by a touchdown pass to Jay Hampton from 28 yards out to give the Panthers a 7-0 lead.

After four more back-and-forth defensive stands, New Albany drove in nine plays 77 yards, which allowed Charlie Lott to find Isaiah Cohran on an out route from eight yards out to tie the game up at seven. However, Amory proceeded to drive down the field in thirteen plays, and Jones found Braxton Griffin in the middle of the end zone from seven yards away to give the Panthers at 14-7 halftime lead.

The momentum shift could easily be felt after the score before halftime, and it swung even more after the Bulldogs fumbled on the opening drive of the second half. Ten plays later, Jones found a hole in the middle of the field and took it himself to the end zone from two yards away to extend the lead to 21-7 for Amory.

Lott quickly struck back for New Albany, as he found Cohran again up the middle of the field from 47 yards away to connect for their fifth touchdown together in the last two games. However, Jones stepped up for the Panthers and scrambled for a ten-yard touchdown to extend the lead to 28-14.

On the ensuing drive, the Bulldogs could not move the ball and was forced to punt after six plays. Amory essentially put it away with a 87-yard touchdown pass from Jones down the sideline to Hampton for the final score of the game to seal the 35-14 win.

Coach Allen Glenn of the Panthers had high praise for his junior quarterback’s performance.

“We really rely on Hunter, and we believe in him.”

Jones surely showed out, as he finished 13/21 with 218 yards and three touchdowns. He also added two touchdowns on the ground to finish with five total scores.

Lott finished the game 11/24 with 173 yards, two touchdowns, and one interception. Both touchdown passes went to Cohran, who finished with 97 yards receiving as well.