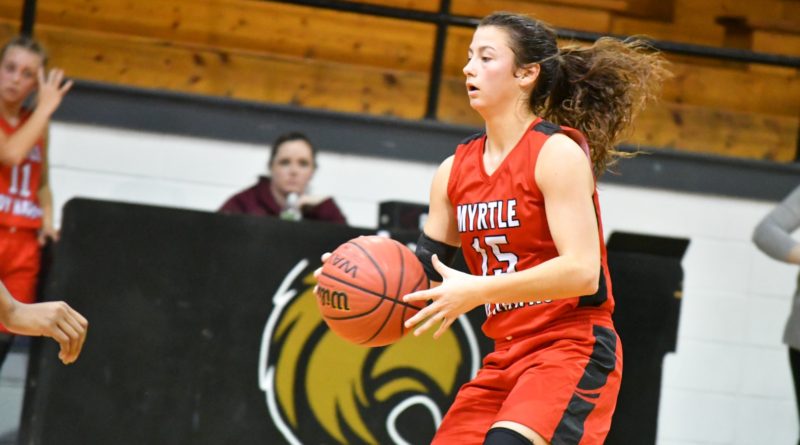 With a young group and only one senior, Coach Greer and his girls are trying to build the Myrtle girls’ basketball program up while also competing for a playoff spot every night.

“Overall, I think this offseason we’ve improved a lot in practice, learned the system, and tried to develop some depth, as well,” said Greer.

Although he stated he’s seen some great improvement, Greer also knows that the work for this team is far from over.

“The jamboree definitely showed us we still have a lot to do and improve on before we are where we want to be as a basketball team.”

Just like with the guys’ program, this team is led by a multi-sport star, but this one puts in plenty of work on the diamond: Kinsley Gordon. Also, like Nugent, Greer has hailed her for her improvements shooting the basketball over the offseason while also praising his other starters as well.

“She [Gordon] has definitely improved her shot from the outside, which will definitely help with our spacing. Also, Charlize Williams has improved greatly in the post, and Lexie Hutchinson, Breanna Smith, and Raykiah Strickland have all made improvements over the offseason, as well.”

One of the greatest issues Coach foresees his group having is depth, so he hopes to have plenty of girls want to step up to fill that role, with a few names already in mind.

“Trinity Enis and Brittany Vanzant have shown some flashes, so I definitely expect and hope for them to help out with the depth this season.”

However, this team only has one senior, so this group is looking to win while also building a great core for the years to come.

When asked about the opponents he is looking forward to facing, Greer eyed what he sees as the teams to beat in Region 3-1A.

“West Union, Hickory Flat, and Ashland are all teams to beat in our division, so I’m definitely looking forward to those games.”

Finally, when asked about this team’s goal this year, Coach Greer was clear in his team’s desires.

“Hopefully, we want to be in the hunt to win the division and go to the state tournament when it’s all said and done.”