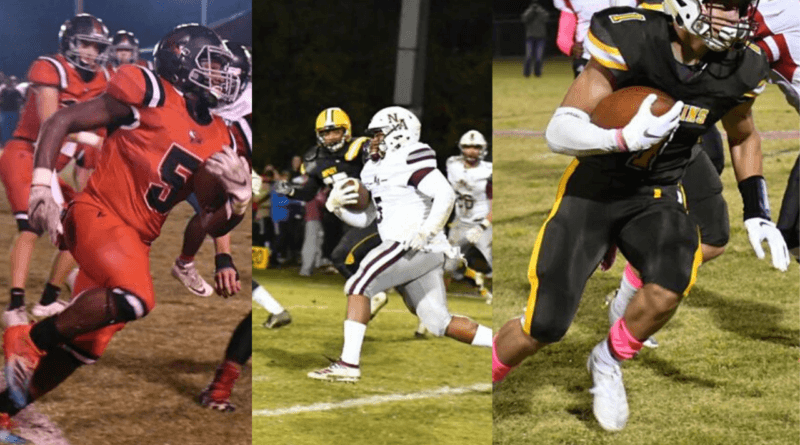 For the first time in the history of Union County football, East Union, Myrtle and New Albany are all in the playoffs.

It’s win or go home for the trio of gridiron teams as they look to work their way through the playoffs.

Here is a preview of each team’s Friday night contests:

Charleston will rely heavily on their run game. They have rushed for 2100 yards and 31 touchdowns, led by Keyshun Cashaw with 725 yards and 9 touchdowns.

The Hawks of Myrtle make their first appearance in the playoffs this season as the #3 seed in district 1-1A. They are on the road to face #2 seed from district 2-1A Noxapater.

Myrtle brings a 6-5 record into the contest while Noxapater is 10-2 on the year.

Myrtle will split quarterback duties between Jackson Mayer and Elijah Thompson. They have combined for 719 yards and 9 scores on the season.

The Hawks will lean heavily on their workhorse running back, AI Nugent, who has accounted for 2155 all purpose yards and 31 touchdowns on the season. Nugent is the leading rusher in 1A football.

On defense, Myrtle is led by Nugent with 79 tackles, 13 TFL and 3 sacks. Connor Coleman has 9 tackles for loss and 4 sacks.

For Noxapater, they bring the second leading rusher in 1A football to the table in quarterback KD Carter. Carter is the leading rushing quarterback in the state with 1594 yards and 25 touchdowns. Senior running back Raheem Hathorn is also a big play threat, as he has accounted for 954 yards and 11 touchdowns on the season.

The Bullgogs, fresh off of their thrilling win last week at home over Shannon, go on the road to face undefeated Greenwood in the 2nd round of the playoffs.

New Albany takes their 8-3 record to the Delta to face the 11-0 Greenwood Bulldogs.

New Albany scores 33 points per contest while allowing 27. Greenwood scores 40 points per game will allowing just 7.9 and has what many throughout the state call Mississippi’s top rated defense.

New Albany’s Charlie Lott has thrown for 1707 yards on the season and 21 touchdowns. Sophmore CJ Hill has rushed for 1451 yards and 19 scores. The Bulldog receiving trio of Isaiah Cohran, Mason Simmons and Cameron Knox have accounted for 1200 yards and 18 touchdowns.

On defense, New Albany is led by Jackson Formsma with 76 tackles. Adrian Garcia has 11 tackles for loss and 5 sacks.

For Greenwood, look for them to bring a balanced offensive attack to the game. Quarterback Deandrea Smith has passed for over 2000 yards and 23 touchdowns while Jamarion Addison has rushed for 1177 yards and 16 scores. Kobe Chambers is their leading receiver with over 900 yards and 13 scores.