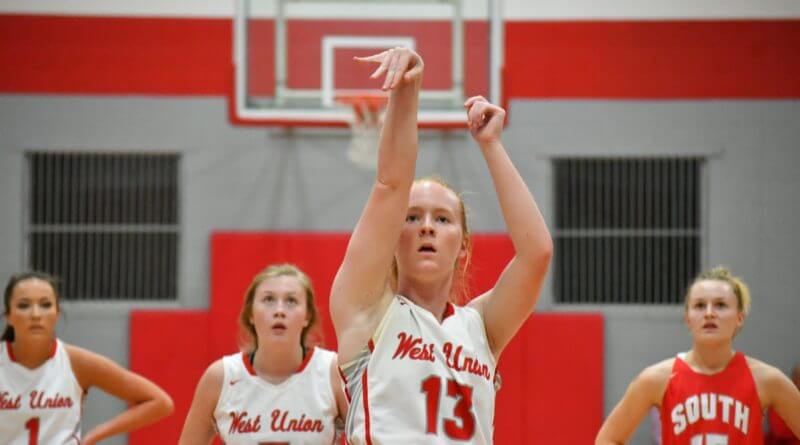 Division play tends to bring the best effort and closest games out of teams. In a night where the division’s top spot was up for grabs early in the season, the West Union Lady Eagles were able to show North Mississippi the threat they are with a big 67-62 victory over the Hickory Flat Lady Rebels on Tuesday night.

“I feel like the girls always here ‘wait until next year with everyone back and we will win it all’. I told them tonight let’s go win something now, and they did just that,” Coach J.C. Hayles stated.

The game got off to a back-and-forth start with both teams trading buckets midway through the first quarter. After the Lady Rebels took a 9-7 lead with 1:32 left in the opening stanza, West Union proceeded to spark a 14-0 run over the next 6:24 to take a 21-9 lead.

However, Hickory Flat would not lay down, and they would stop the run and keep the deficit at twelve going into halftime at 28-16.

The Lady Rebels started the second half very strong with a 8-2 run in the first 2:50 of the third quarter. Overall, it was a 21-13 third quarter that allowed Hickory Flat to bring it back within four points.

In the final quarter of play, West Union released their hold on the lead for the first time since they trailed 7-9 in the first with 2:08 left in the game off a score by R’Daztiny Harris. Around this same time, Annie Orman, who had scored forty points in the game, fouled out.

Coach Hayles immediately called a timeout and rounded up his team.

“We have worked to show everyone how much better we have been. I told them that this was their time to show it. When everyone sees Annie is out and think it’s over, now is our chance to seize the moment.”

Those words resonated with the Lady Eagles as they finished the game on a 12-6 run to put themselves in the driver’s seat in the division with a 67-62 victory.

As for West Union, Orman was the game’s leading scorer with forty points. The Lady Eagles improve your 8-6 (2-0) on the season and face Myrtle Friday night on the road.

In guys action, a high-scoring affair was in store for fans as the West Union men’s team took down the Rebels 90-81.

The first quarter was similar to the game prior, with back-and-forth scoring by both teams, giving Hickory Flat a 19-18 lead after one. The second quarter was a breakout performance for junior Brandon Phillips, as he added eleven points in the quarter alone to give his Eagles a 42-37 halftime lead.

In the third quarter, West Union took control of the contest with a 30-21 advantage. Luke Willard added eleven of his own in this quarter as the Eagles took a fourteen point lead over the Rebels.

Hickory Flat outscored the home team by five in the final period, but it made no difference as West Union clinched a big time win at home.

West Union was led in scoring by Willard with 27, and Phillips added 21. The Eagles improved to 8-6 (2-0) and kept control of the division lead.