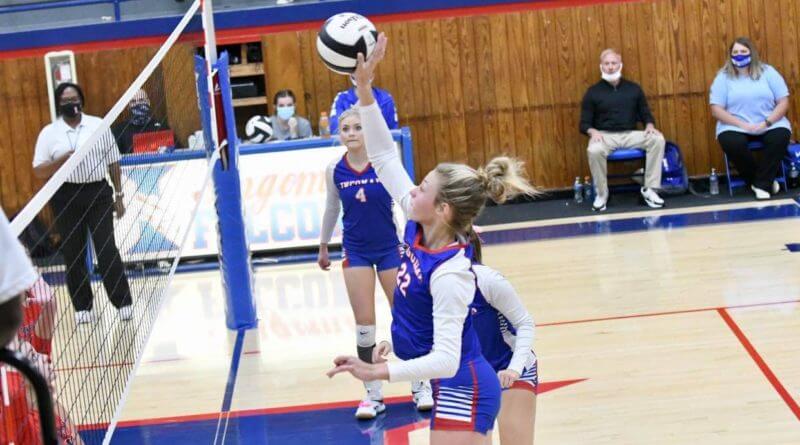 The Ingomar Lady Falcons are competing in the first ever 1A MHSAA volleyball playoffs and have figured out a solid formula for advancing.

Start fast, build a lead and finish strong at the net. Against Pine Grove on Saturday in the state quarter-finals, it was check, check and check.

The Lady Falcons built an early advantage in each set and used it to put the visiting Lady Panthers away 25-14, 25–17, 25-20 and continue their season.

In the opening set, behind the strong serve game of Macie Phifer who finished with 6 aces, Ingomar built a 9-0 advantage on their way to an early lead in the match.

In the second set Lindsey Dillard did the damage early, as she started the service for the Lady Falcons and they built a 6-0 advantage early. Pine Grove cut the Ingomar lead to 16-13 on a Kaylee Haynes block at the net but a trio of plays put Ingomar on top for good. Rylie Ozbirn had a kill followed by a Phifer kill and a Katie Beth Hall ace to put the second set out of reach.

Brooklyn Wicker ended the second set with several strong serves, including the game winner the Lady Panthers were not able to return.

In the third set, the Lady Falcons started strong but allowed the Lady Panthers to regain the lead and Ingomar trailed 16-12 in the set.

From that point forward, setter Lindsey Dillard and hitter Macie Phifer took control of the contest.

Phifer rattled off the game’s final 3 points to finish with nine kills on the night, including a powerful kill to claim the victory and advance Ingomar to the North Half final.

The Lady Falcons advance to 17-6 on the season. They will compete for a spot in the 1A state title game as they travel to Hickory Flat on Tuesday. First serve is set for 6 pm. More pictures from Saturday’s contest on the Union County Sports facebook page and on Instagram (@sportsmississippi)