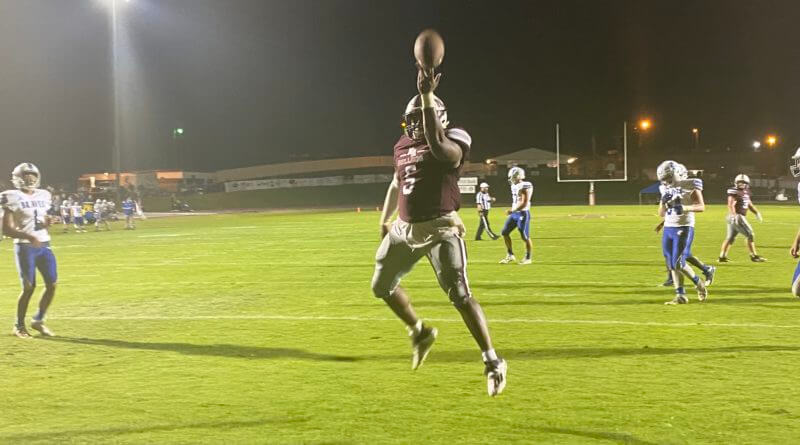 New Albany came into Friday’s homecoming matchup off a tough loss at Corinth 55-38. They looked like they had a point to be proved as they dominated Tishomingo County from start to finish in a 56-7 win.

The Bulldogs started off hot by forcing a punt and scoring in two plays, which was set up by a 77-yard run by C.J. Hill.

After another punt, A.I. Nugent got in on the action with a 35-yard run to set up a Isaiah Cohran rushing touchdown on the next play. Hill followed right back with a touchdown run from 34 yards out to give New Albany a 21-0 first quarter lead.

The Braves fired back with their only score of the game on a 54-yard touchdown pass from Blake Counce to Mason Daniel to bring it to 21-7.

However, the Bulldog defense held strong the rest of the way. Joe Mathis recorded a passing touchdown to Cameron Knox, and Kody Atkinson and Nugent added rushing touchdowns to make the halftime score 42-7.

In the second half, the clock ran for most of play due to New Albany keeping it on the ground, but that did not stop Hill and Kaleum Shaw from adding rushing touchdowns to bring the game to its final score of 56-7.

Coach Cody Stubblefield was proud of his team’s response after the loss to Corinth.

“It’s big and anytime that we are successful, we get our younger guys in and they see some success, that’s a boost going forward and it’s a really great thing. We’re not happy with our record, we’re not happy with where we left the game with Corinth and we know that we are capable of playing with those guys and you know we’d love to run into them again.”

C.J. Hill rushed for 253 yards and two touchdowns on 15 carries. A.I. Nugent carried the ball nine times, along with adding 152 yards and a touchdown.

New Albany moves to 4-3 on the season and ends their regular season next week at home against Ripley in a battle for the two-seed and a home playoff game.