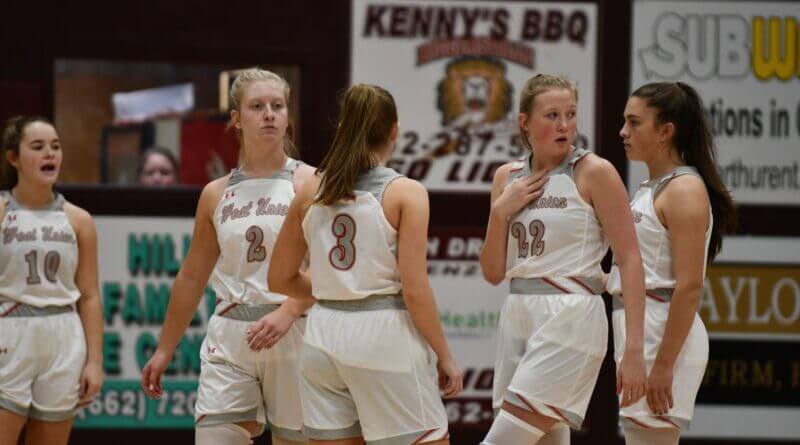 The Union County Tournament, like many sporting events, has been effected by COVID-19.

The tournament is not being held at a central site. Instead, the higher seed host each individual game.

Despite the change in format, it had no effect on the great action that took place on the opening night of the tournament.

After a hard-fought battle just a week prior against the Myrtle Lady Hawks, the West Union Lady Eagles rode a hot shooting start to their second win over the rival Lady Hawks in as many weeks.

The Lady Eagles built an early 11-2 lead and never let up on their way to a 30-14 halftime lead, thanks to a Eden Conlee half-court shot to end the first quarter and six threes in the second from the entire Lady Eagle squad.

“It helps when you hit shots early from the outside, and that’s what we were able to do tonight,” said coach J.C. Hayles.

The Lady Hawks fought valiantly, but offensive struggles plagued a group that was missing close to half of their contributors, including leading scorer Kinsley Gordon.

With the win, the Lady Eagles will face the winner of Friday’s game between Ingomar and New Albany for the Union County Tournament Championship, two teams West Union has fallen to this season.

“Both of them [New Albany and Ingomar], we felt like we had a shot to win the game, but we just didn’t make enough plays, so we are excited for another shot at them,” said Hayles.

Eden Conlee led all scorers with 13 while Ella Kate Taylor added 12 for the Lady Eagles.

The Lady Bulldogs earned a shot at top-seeded Ingomar with a big win at home over the Lady Urchins on Thursday.

The win was sparked by a 23-10 run made by New Albany in the second quarter.

Just like the Lady Bulldogs, West Union’s men earned their shot against top-seeded Ingomar on Friday with a home win over rival East Union that was sparked by a big 11-0 run to end the first quarter.

The Urchins pushed back with a 8-0 run in the fourth to cut the deficit to six, but the Eagles responded with a 8-2 run of their own to close out the contest.

With the win, West Union is set to play the Falcons at 7:45 on Friday at Ingomar to try to pull an upset and avenge two earlier losses this season.

“We’d like another shot at them. Like we always say, ‘if you wanna be the best, you have to beat the best’ and that’s what they are, so we are excited for another shot,” said coach Timbo Henderson.