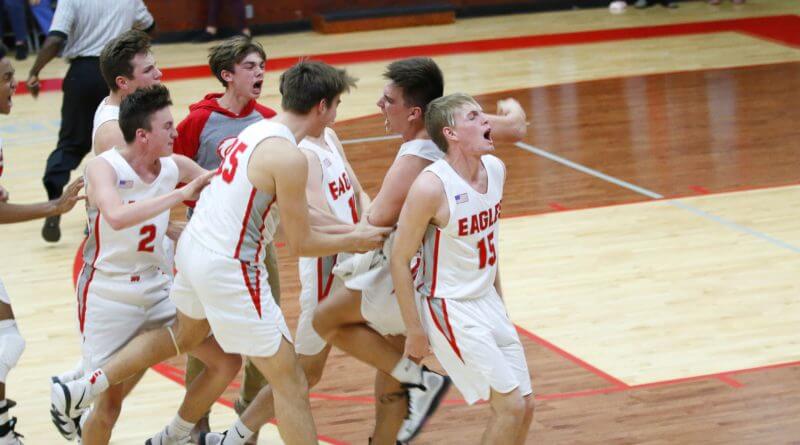 After being swept by the New Albany Bulldogs at home by last Thursday, the West Union Eagles looked to get their first win on the season for the men and women against the North Pontotoc Vikings. It was a tale of two nights, however, as the Lady Vikings win 56-46 while Luke Willard hit a game-winner to push the Eagles ahead of North Pontotoc 74-73.

In the women’s game, it truly lived up to the stigma of basketball being all about runs. In the first quarter, the Lady Vikings jumped ahead on a 13-4 run, but West Union answered right back with a 12-9 run for the rest of the first half to make the score 22-18.

At the very beginning of the second half, North Pontotoc went on a 9-0 run to take a 31-18 lead, but the Lady Eagles answered again with an 8-0 run to bring the score within five points. However, lead by Maddie Guerin’s hot shooting, the Lady Vikings responded with another 11-2 run that truly never saw the game come back into dangerous territory as North Pontotoc won their opening game, and West Union fell to 0-2 on the season.

Moving into the men’s game, North Pontotoc jumped out to a 5-0 lead, but Luke Willard checked in for his first appearance of the season, which helped the Eagles hit an 8-0 run to respond. The first half continued to go back-and-forth from there, and the Vikings barely clung to a 27-25 lead at the end of the half.

In the middle of the third quarter, North Pontotoc hit a big 9-0 run to make the score 43-31, but West Union responded with a big effort at the end of the third to bring the score to 46-41.

From there, North Pontotoc hit the Eagles with the biggest run of the night, a 13-0 run to make the score 59-41. Down by eighteen, West Union continued to claw back in and had the deficit down to nine, but Kyle Sappington hit a huge corner three with 1:05 to go to make the lead 70-61 for the Vikings.

Despite what seemed like a dagger, Coach Timbo Henderson urged his guys to stay in the ballgame.

“Keep fighting, and we have a shot to win this.” Henderson said.

That is exactly what West Union did as they quickly got much needed three point baskets from Sam Callicutt and Caleb Graves. Along with it, the Vikings missed sixteen free throws in the fourth quarter, many of those in the same 1:05 stretch, to aid the Eagles.

The score stood 73-71 North Pontotoc after Ty Roberson went one-for-two for the Vikings in their last trip to the line, and Coach Chris Parman called a timeout that proved to be very costly.

Out of the timeout, the Eagles had to go the full length of the court in 3.1 seconds. Luke Willard recurved the inbounds pass close to half court, made two dribbles, and nailed the shot of his career with a game-winning three pointer to push West Union over North Pontotoc at the buzzer 74-73.

“Out of all the shots I’ve put up over the offseason, I felt more confident about that one than any of the others,” Willard said.

After the men (70-61) and women (54-42) for West Union both picked up big wins at home against South Pontotoc last night, the men play Shannon at a neutral site at Pontotoc High School on Saturday while the women gear up to host Alcorn Central next Tuesday.