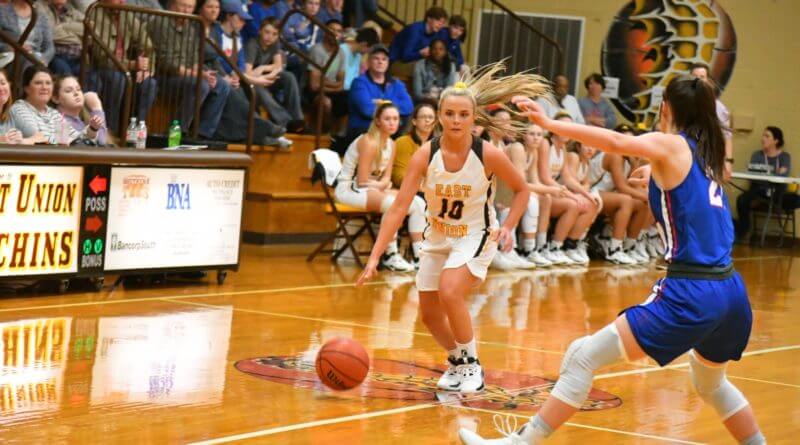 BLUE SPRINGS- For the first hour and a half, it was absolute bliss for the East Union faithful. However, a nightcap loss left a bittersweet taste in the mouths of Urchins everywhere as the Lady Urchins snapped a nine-year losing streak to the Ingomar Lady Falcons 56-40, but the men’s team fell to the Falcons 79-48 to split the night’s games.

The first quarter was a back-and-forth affair with East Union consistently getting fast break buckets in the early going. Kylee Johnson did not allow her team to go down without a fight, however, as she scored four of her leading ten points in the opening stanza to keep it within a score.

The second was more of the same with lead changes aplenty, but Jessie Roberts nailed a buzzer-beating fifteen foot jump shot to give the Urchins a big momentum boost. This allowed East Union to take a 26-22 lead into the locker room after the first half of play.

The big change took place from the second half on, as coach Chase Brown adjusted his team into a 2-2-1 look from their man-to-man in the first half. This proved critical as the Lady Falcons simply struggled to control the basketball, much less score the last sixteen minutes.

Coach Brown knew that the change had to be made to secure the victory.

“We wanted to force them into deep shots and get rebounds.”

The Lady Urchins outscored Ingomar 30-18 in the second half, which allowed them to pick up the marquee win of the season so far 56-40.

Moving into the men, the Urchins did not play a bad game, but the Falcons high-powered offense was simply too much for the Urchins to handle.

Clayton Stanford had nineteen points in the opening half of play, and finished with 21 points.

“Clayton’s been the guy… he’s been a matchup problem a lot of nights,” coach Johnathon Ashley stated.

The Urchins were victim of a 13-0 run by Ingomar to start the game, and they trailed by a hefty margin 48-29 at the end of the first half.

Smithey added 12 points for the Falcons to assist Stanford. DeJuan Hubbard led East Union with 17, and Josh Henderson added 10 points as well. Ingomar improved to 6-0 on the year while the Urchins fell to 0-2 early in the season.