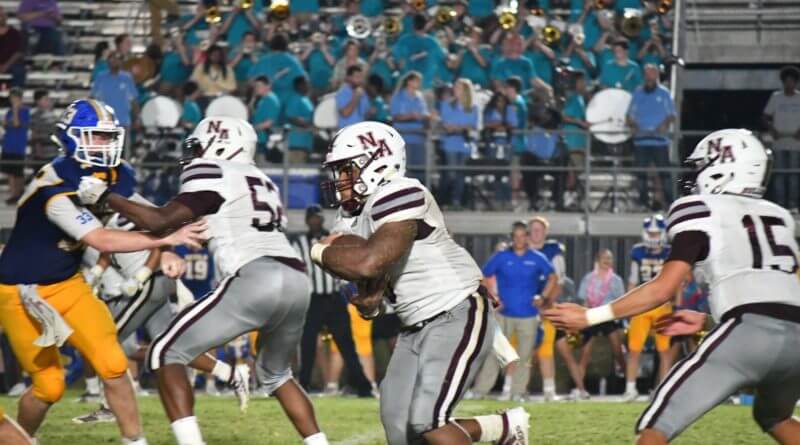 After one of the best seasons in the program’s recent history, the New Albany Bulldogs are back and aiming for greater heights than last year.

The Bulldogs have nineteen seniors and return many starters off a team that lost in the second round of the 4A playoffs to eventual North Half runner-up Greenwood.

One of the biggest returners? Junior running back C.J. Hill, who is one of the best returning backs in the area.

Hill, while being one of the area’s best backs, isn’t focused on any personal goal.

“Personally, my main goal is to win every game we play and make a run for state [championship]. I can say I believe we are more focused and locked in than we ever have been.

Hill says the team has used the loss to Greenwood last season simply as fuel to their competitive fire.

For the rest of the offense, losing starting quarterback Charlie Lott is the biggest hole to replace. However, Ripley transfer Joe Mathis seems to be the guy for the Bulldogs as fall camp commences.

As if they needed more talent in the backfield, New Albany also adds Myrtle transfer A.I. Nugent at halfback and outside linebacker.

Hill spoke extremely highly of Nugent and what he adds to the Bulldogs.

“It’s always great to add more talent to the roster, and A.I. brings in not only a good player on offense but a big part of our defense as well.”

Nugent comes in as one of the best 1A running backs in the state last season rushing for 1,922 yards and 29 touchdowns.

As for their potential as a two-headed monster in the backfield, Nugent was extremely optimistic.

“I believe we got the potential to have over at least 400 rushing yards a game and just believe that we could be unstoppable.”

Along with returning top receivers Isaiah Cohran and Mason Simmons, the Bulldogs might have one of the best offenses in the state.

On defense, New Albany brings back plenty of production, including their leading tackler in Jackson Formsma with 77. Also, Mason Simmons again returns as the team’s top defensive back with five interceptions, three forced fumbles, and five recovered.

Here is the Bulldogs’s full schedule: