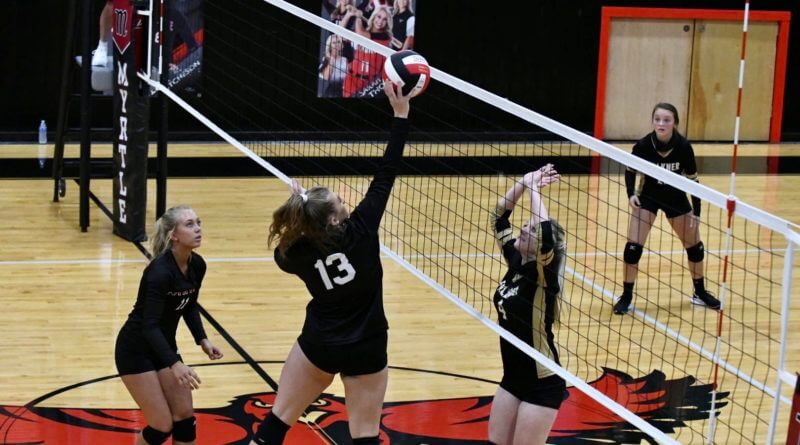 Myrtle sent their seniors off in style, picking up a win in sweeping fashion on Thursday over the visting Falkner Lady Eagles during the final home regular season contest of 2020.

“I thought we executed well. We have really worked on our passing and sets and I think that showed,” head coach Robert Gordon said of his teams win.

Myrtle took the first set after an early back and forth saw the contest tied at 8 thanks to a trio of Lexi Hutcheson kills and a pair of aces from Sarah Kate Thompson. Kinsley Gordon added 2 aces and 2 kills in the first, while Amanda Watkins was credited the the final point.

The new lineup again came up the the victory, with Hutcheson doing damage at the net and coming up with the games final point on a kill set up by Thompson.

In the third set, Myrtle went back to their starting lineup with Gordon and Kiersten Shoops returning. The starters built up a 14-4 lead that saw three aces from Thompson, a pair from Gordon and an ace plus a drop shot point from Shoops.

Hutcheson was again a problem at the net, registering a pair of kills. Watkins put up a kill to move the score to 22-17, and the contest would never get closer.

Gordon ended the match on a nice setup at the net from Shoops.

Myrtle takes on Hickory Flat next Tuesday with the winner claiming the district title and the loser being the runner-up. Either way, the Lady Hawks are in the playoffs in their first year of eligibility.