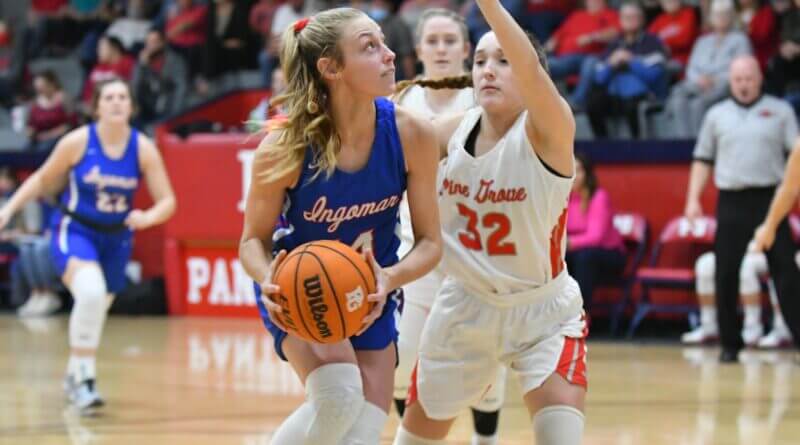 Ingomar and Pine Grove came in ranked as the #1 and #2 girls basketball teams this preseason with years worth of basketball history between them and head coaches that have a combined eight gold balls.

Not a bad way to spend a Friday night.

The Lady Falcons handed the Lady Panthers their first loss to a 1A opponent since the 2016-2017 season a year after Pine Grove gave Ingomar their first home loss in five seasons.

Ingomar got their first of what is sure to be many career nights from eighth grade sensation Macie Phifer who went off for 35 points and 15 rebounds as the Lady Falcons used a big third quarter and a series of clutch plays to come away with the victory to move to 3-0 on the season.

Phifer scored all 11 points in the first quarter for Ingomar as she was unstoppable in the post against a solid Pine Grove defensive unit who tried multiple looks and multiple players against her. An 11-9 Lady Falcon lead after one quarter was a taste of the type of close contest that was to come.

Ingomar led just 26-26 at the half, but was able to give themselves some breathing room in the third quarter thanks to another monster performance from Phifer, who put up 14 points and 6 rebounds in the quarter.

In the fourth, a pair of Kaylee Johnson three pointers and a set of Katie Beth Hall free throws stretched the Lady Falcon lead to 11, but Pine Grove chipped away at the lead and had cut it to six with under a minute to play.

Phifer again stepped up, knocking down two sets of free throws before Kenzie Miller and Sydney Carter kocked down a three pointer each for Pine Grove, cutting the Lady Falcon lead to 3 with just 12 seconds to play. Following an Ingomar turnover, the Lady Panthers had a shot at the goal as time expired but it fell short allowing the Lady Falcons to clinch the win agains the four time defending 1A champions.

Ingomar led 21-14 after one quarter and the score was never in doubt as a potential marquee matchup was derailed due to the Falcons missing Dandy Dozen selection Zach Shugars and the Panthers being without preseason all-state selection Carson Rowland and second leading scorer Jack Hudson.

The Falcons remained undefeatd on the season and got big games from Tyson Smithey (28 points) and Adin Johnson (24 points).

Both squads are back in action Tuesday against Hickory Flat.