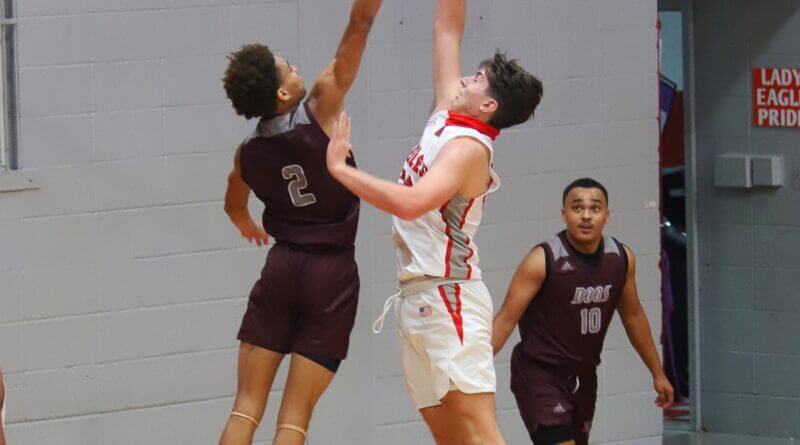 Despite the happiness and flare that usually accompanies Homecoming night, it did not shake the New Albany Bulldogs as they swept the West Union Eagles in both men’s and women’s action on the Eagles’ home floor.

In a game that was a back-and-forth affair for the entire fourth quarter, Ashanti High’s 18 second-half points was the difference maker as the Lady Bulldogs surged from behind to win a 40-38 contest over the Lady Eagles.

The game featured a strong start by West Union with a 9-0 run to begin the game, which helped the Lady Eagles hold an 11-4 advantage at the end of the first. However, the constant 2-3 zone applied by the Lady Bulldogs forced West Union into multiple turnovers and missed opportunities, and it led to a sloppy second quarter that left New Albany only down 16-8 at the break.

In the second half, the Lady Bulldogs found their offensive flow with most of it coming from High. She led her team on a 19-10 third quarter and scored 13 in the third period alone to give New Albany their first lead of the game with 31 seconds left in the third.

As for the fourth, it felt like a completely different ballgame. The ball was pushed up both ends of the floor as it felt like neither squad could secure the crucial string of stops needed to seal the game.

In the end, it came down to a defensive foul by Eden Conlee with only one second remaining. Of course, it was High who was sent to the line, and left no doubt as she sunk both free throws to secure the game for her Lady Bulldogs.

High led all scorers with 22 points, and the duo of Conlee and Annie Orman led the Lady Eagles with 12.

New Albany improved to 3-2 while West Union dropped to 1-2.

The Bulldogs jumped out to a hot start and never looked back in a 88-48 thrashing of the West Union Eagles.

Due to COVID-19 concerns, the Eagles missed their first four scheduled games of the season and faced the rival Bulldogs for their opening contest of the 2020 season. New Albany took full advantage of a young squad that had not seen game reps yet with heavy full-court pressure and tough play on the offensive and defensive glass.

The Bulldogs held a 26-7 advantage by the end of the first quarter and continued to slowly stretch out the lead the rest of the way.

The Eagles fared much better on the offensive and defensive end for the final three periods, but a 19-point first quarter deficit and inefficiency keeping New Albany from offensive rebounds and second-chance points prevented any semblance of a comeback from taking place.

The Bulldogs were led offensively by Kamron Carter and Michael Smith, who both scored 23 points in the win. As for the Eagles, senior Caleb Graves led the way with 15, and Daniel Conlee backed him up with 12.