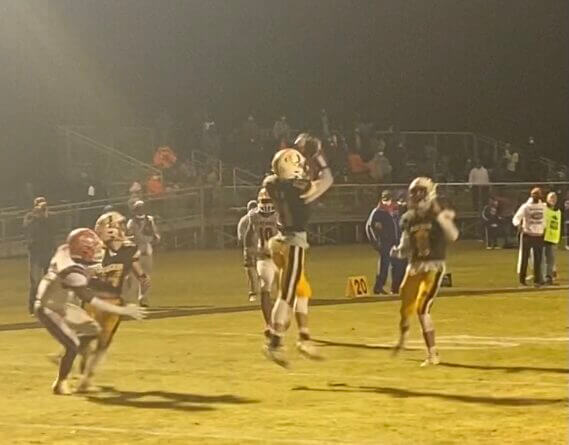 In what has to be considered among the best high school football games in Mississippi this year, the East Union Urchins pitched a second-half shutout to erase a 16-point deficit in a 26-22 victory over the Northside Gators.

The win will send East Union to North Half, which will be their first appearance in school history.

After the game, head coach Todd Lott praised his players and coaching staff for an excellent game plan and ensuing execution.

The game started off completely in favor of Northside as Tarrick Latham returned the opening kickoff to give his Gators a lead 12 seconds into the contest at 6-0.

Both defenses slugged back and forth until Connor Timms plunged into the endzone on a fullback dive to tie the game up at 6-6 after a missed extra point.

However, the Northside offense showed incredible speed and athleticism all night. It was fully shown off as Thaddes Latham had two touchdown runs of 40 and 27 yards to give the Gators a 22-6 halftime advantage.

Despite the adversity, the Urchins never backed down.

The offense slowly began to move the ball, but the defense played what would have to be called the best half of the season, shutting out the potent Gators offense.

As Northside was driving into East Union territory early in the fourth, freshman Hayden Frazier jumped a swing route for a 66-yard interception return for a touchdown.

Coach Lott called this the momentum shift that turned the tide of the game for the Urchins.

On the ensuing drive, Hayden Roberts notched the first of two interceptions to give his squad excellent field position.

The following drive went three-and-out, but East Union came up with another desperately needed turnover with a forced fumble.

On the drive that would decide their season, Rett Johnson fired a beautiful 47-yard dime to Roberts to give East Union their first lead of the night with less than 90 seconds remaining at 26-22.

Northside drove down into East Union territory, but a final heave into the endzone was picked off by Roberts, which cemented the Urchins’ spot at North Half.

Hayden Roberts finished the game with two interceptions and the game-winning receiving touchdown.

With the win, East Union will travel to Calhoun City next Friday after the Wildcats beat East Webster 30-14.