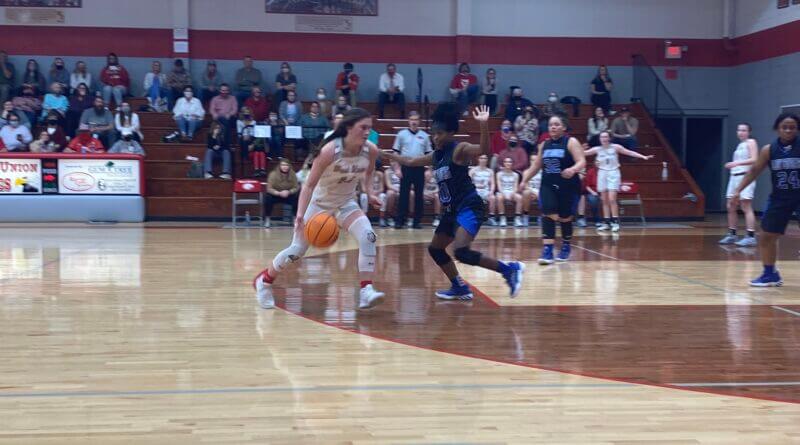 Despite leading scorer Annie Orman exiting the game in third quarter due to injury, the West Union Lady Eagles played stifling defense in the second half, which led the way in their 44-35 victory over the Blue Mountain Lady Cougars in the second round of the 1A State Basketball Championship playoffs.

Coach J.C. Hayles called the second half the team’s best defensive performance of the season.

“We’ve been able to press people and turn them over… hats off to Blue Mountain. They guard very well,” said Hayles.

The first half was dictated by the Lady Eagles’ aggressiveness on offense, especially from Orman, who scored all of her nineteen in the first half.

This led to the Lady Cougars getting into early foul trouble, which helped West Union build a ten-point halftime lead at 30-20 off many free throws.

“We were hoping with them [Blue Mountain] being young, we wanted to come out and see if they could match intensity.”

Orman would leave the game in the early third with an ankle injury; however, the Lady Eagles did not allow their offensive woes from the second to lead to a comeback by allowing only 15 points in the second half.

Coach Hayles also credited the win to having players step up and handle the ball with guards in foul trouble and Orman out of the contest, namely Emma Callicutt and Mary Greer.

Orman led the way with 19 for the Lady Eagles while Eden Conlee added eight and Callicutt dropped seven points as well.

With the win, West Union will face rival Ingomar on Friday for the right to head to the Big House in Jackson.