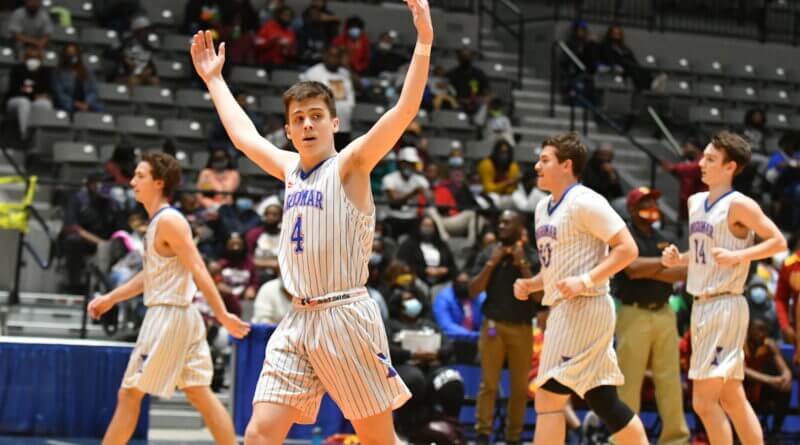 Many efforts to repeat as state champions fall short. However, the Ingomar Falcons now sit just one game away from doing so after a 64-50 victory over the McEvans Warriors.

Ingomar started incredibly strong by using good defense and opportune offense to jump out to a 17-3 lead at the end of the first quarter.

However, the Warriors quickly rebounded with aggressive drives to the basket that put the Falcons in major foul trouble and jumpstarted a 23-12 run that left Ingomar clinging to a three-point lead at the half.

Head coach Jonathon Ashley says that a switch to a 2-3 zone was key in helping pull away in the second half.

“I told the guys in the locker room that we used to be told that ‘necessity is the mother of all invention.’ We couldn’t stop their penetration, so we know we had to do something,” said Ashley.

Combined with some big shots by Zach Shugars and Adin Johnson, McEvans never managed to consistently score against the zone, which allowed the Falcons to pull away late in the third quarter.

Adin Johnson led all scorers with 19 points. Tyson Smithey added 14 while Shugars dropped 13 alongside them. Kyle Roberson was also key with eight points and big moments on the inside with Shugars and Smithey in foul trouble.

With the win, Ingomar improves to 28-5 on the year and will face off against the Biggersville Lions for the 1A State Championship at 3 p.m. on Thursday.