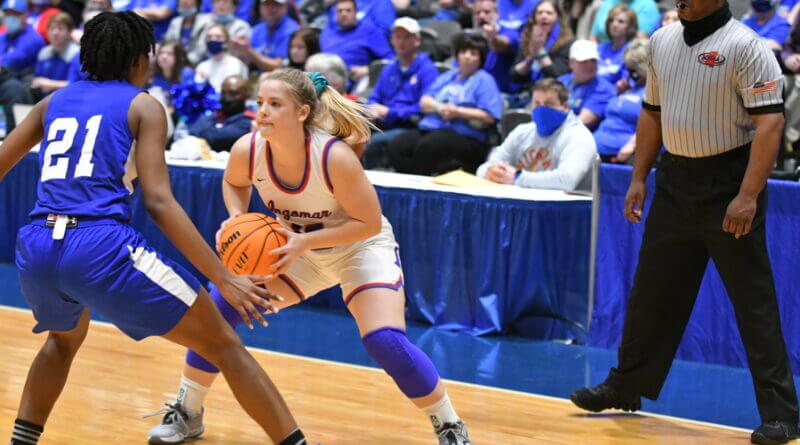 As a program, the Ingomar Lady Falcons are used to playing for state titles in Mississippi Coliseum. However, the 2020-2021 edition is a group that has not had the chance to experience that.

With their 58-33 win over Simmons, Ingomar will get that chance as they play for a state championship on Thursday.

According to Katie Beth Hall, it’s oh so good too.

“Our team is so excited. We’re ready,” said Hall.

Ingomar took control of the game in the first minute off of two offensive rebounds and a Kaylee Johnson three-pointer.

From that point on, Hall and the Lady Falcons did not even let the Lady Devils close.

Hall hit on her first three attempts from three for nine first-quarter points as Ingomar started on a 9-0 run and led 18-6 at the end of one.

The Big House is a gym that is usually not known to benefit shooters. However, it does not surprise coach Trent Adair that Hall found her stroke early.

“She’s never seen a shot she doesn’t like,” said Adair.

Hall continued her hot shooting with fifteen points in the first half on five of six shooting from deep. Kaylee Johnson added eight points as the Lady Falcons took a 19-point lead from that point on.

In the second half, Ingomar used excellent defense and timely baskets to never allow Simmons back under nineteen.

As for what prepared her and her team for their outstanding performance, Hall simply said prayer and loaded teas were the keys.

Macie Phifer finished the game with a double-double and as the leading scorer with 21 points. Hall added 18 on six of seven shooting, all from deep, while Kaylee Johnson dropped 13 with three three-pointers.

Simmons ends their season at 19-4 with the loss.

With the win, Ingomar improves to 22-9 and will face West Lowndes in the 1A State Championship game on Thursday.