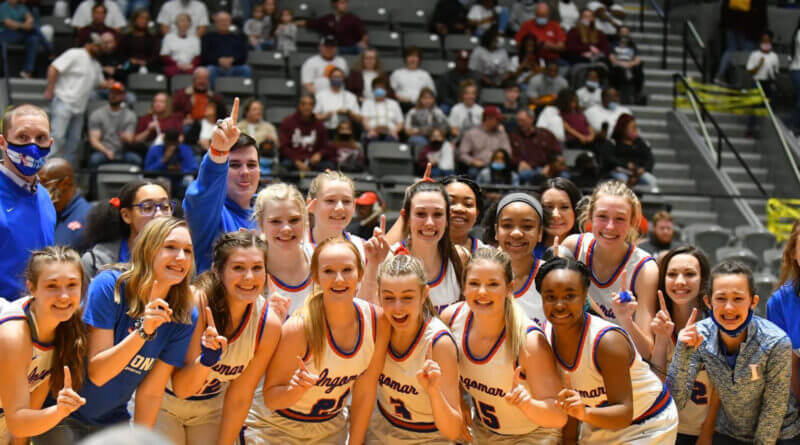 The gold ball is back at Ingomar.

After three-peating from 2016 to 2018, the Lady Falcons took a two year break before re-claiming the trophy with a 55-51 win over West Lowndes.

The Lady Falcons took an early lead and looked to be coasting towards the crown, but West Lowndes showed grit with their senior laden team and tied the game several times throughout the 2nd half.

Every time the game would tighten, the Lady Falcons would get a big play. More often that not, those big plays would come from 8th grader Macie Phifer.

Phifer was named the games MVP with 29 points, 13 rebounds and 3 blocks, all in the fourth quarter.

The Lady Falcons led 31-21 with seconds to play in the first half, but the Lady Panthers got a three pointer from Averi Sanders at the halftime buzzer to cut the lead to 31-24. The momentum from that point seemed to shift towards West Lowndes, but the Lady Falcons wouldn’t let the game slip away.

Ingomar got four three pointers from sharpshooter Katie Beth Hall, who finished with 16 points, to draw attention to the perimeter and open up the lane for Phifer and the Lady Falcons to go to work inside.

Ingomar overcame 17 turnover on the day and a strong performance from the experienced team from West Lowndes.

The Lady Falcons hit 7 three pointers as a team.

The young team from Ingomar played only underclassmen in what could be the start of another run of titles for the Lady Flacons.