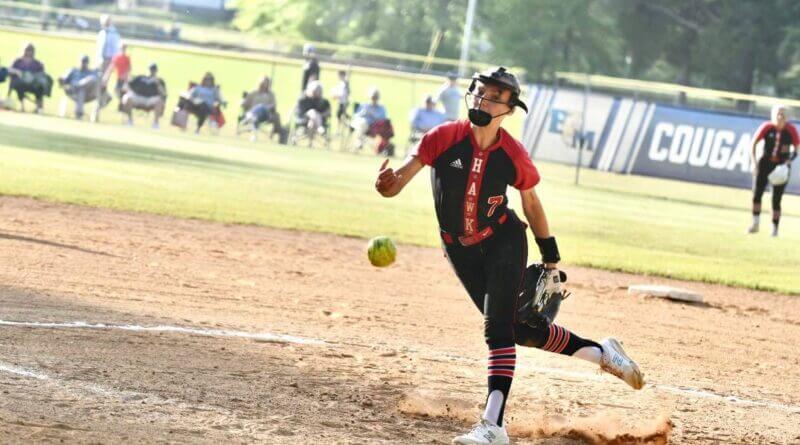 Hit the ball and throw strikes is usually a recipe for success in softball.

Done and done for the Lady Hawks of Myrtle

Myrtle kept putting the ball in play and pushing runs across the board and pitcher Caylie Streich had more strikeouts (5) than hits allowed (4) in a complete game shutout as Myrtle took game won of their best of three series against Blue Mountain 10-0.

“I was proud of how our girls went to the plate ready to hit. They kept the pressure on the defense and made plays when we needed them,” Coach Brooke Gordon said after the victory.

Myrtle jumped out to a 3-0 lead in the top of the first inning on an RBI single from Kinsley Gordon, an RBI triple from Kinzie Waits and a RBI double from Olivia Decanter.

Six runs early was big for Myrtle, but they could have added more in the early inning.

“I like it when we get a lead and are aggressive early. Six runs in the first two innings was big, but we got thrown out on the basepaths a few times and we could have gotten even more,” Gordon said of her teams early lead.

Six runs proved more than enough for Streich, though, who threw 53 of her 74 pitches for strikes.

Decanter would lead at the plate with a pair of doubles. Waits, Thompson and Breanna Smith would each add a pair of hits while Gordon had a pair of RBI and a pair of runs.

Myrtle can close the series out at home on Tuesday.