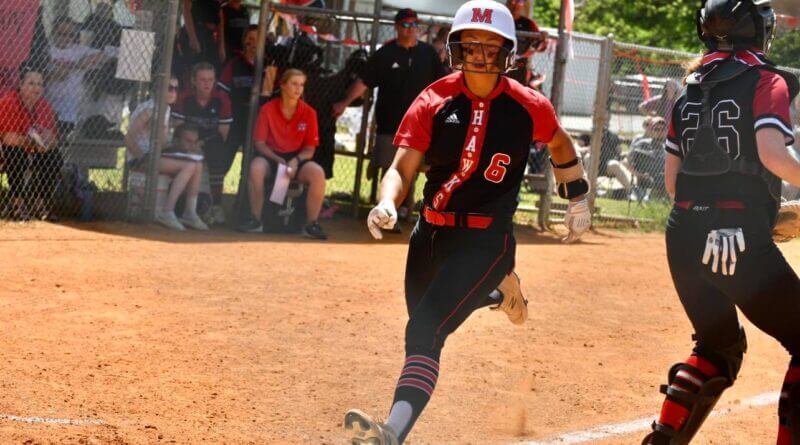 The Lady Hawks broke out the brooms on Saturday and swept their way into the North Half Championship series.

Myrtle used a strong pitching performance from Caylie Streich and timely hitting to come away with a pair of wins over the Lady Eagles of Wheeler by scores of 3-1 on Friday and 6-1 on Saturday.

The Lady Hawks had 3 RBI on 4 hits in a pitchers duel on Friday. Kinsley Gordon led with a home run in the bottom of the first while Olivia Decanter brought in Gordon on a double in the fourth. Streich then scored Decanter on a single later in the inning for the games final run.

Caylie retired 13 Lady Eagles by way of strikeout in a contest where hits were at a premium, as Wheeler starter Randi Johnson finished with 9 strikeouts of her own.

In game 2, the Lady Hawks would head to Wheeler and close out the series with more of an offensive spark and another stellar pitching performance from Streich.

Myrtle managed 9 hits in the series clinching contest, with 5 of them driving in runs.

Gordon got the scoring started in the 4th inning as she led off with a stand up triple. She was brought in on a Caylie Streich squeeze bunt play.

The Lady Hawks got a pair of runs in the 5th inning and a trio of scores in the 6th to close out the contest. Streich led with a pair of RBI with Breanna Smith, Kinzie Waits and Emma Mayer each driving in runs as well. Sarah Kate Thompson, Decanter, Jessica Pickens and Dream Carnell each crossed home plate for a run in the deciding game.

Streich struck out 8 with no issued walks and scattered just 4 hits from the circle.

Myrtle is now 2 wins away from playing for a state title. They take on Hamilton in the North Half title game.