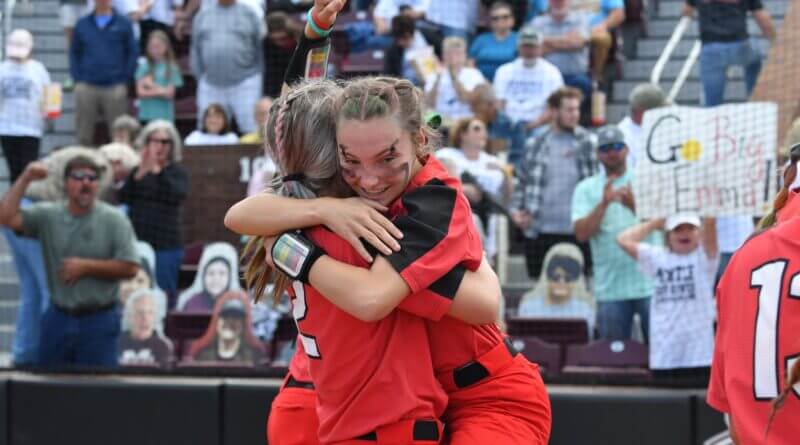 A 1-3 start has not been what has defined the Myrtle Lady Hawks as they battled back in the seventh inning to claim a 5-4 victory over the Stringer Lady Red Devils.

Heading into the final inning, the Lady Hawks stood just three outs away from a shutout victory. However, Stringer fought back by scoring four runs off four hits and three errors to take their first lead of the game.

The Lady Hawks showed resiliency, however. Sarah Kate Thompson hustled out an infield single, and Emma Beth Mayer followed it up with a two-run walk-off home run to dead center to complete the comeback win.

“Nothing comes easy. We made some errors in the top half of the 7th, but I thought our girls were swinging the bats well. Hats off to Skate on hustling down the line to give us a runner on. I told Emma to be patient, but she jumped on one and hit it hard. I am proud of our effort and fight at the end to win it,” said coach Brooke Gordon.

Myrtle led from the first inning with Kinsley Gordon’s RBI triple and held it until the top of the seventh.

Caylie Streich secures the win for the Lady Hawks with four allowed runs on six hits along with eight strikeouts.

Streich and Mayer led the way at the plate for Myrtle with two hits each.

With the win, the Lady Hawks stand just one win away from the 1A State Championship. Game Two is slated to be played on Thursday at Mississippi State University. First pitch is set for 12:00 p.m.