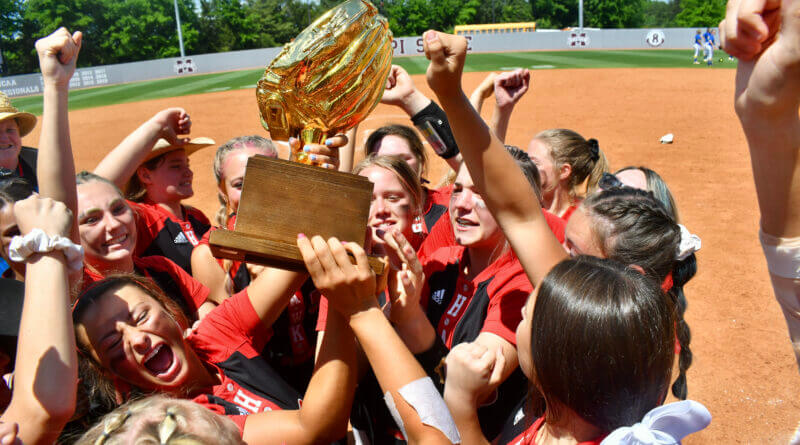 The Myrtle Lady Hawks rode excellent pitching from Caylie Streich and a four-run seventh inning to a 7-1 victory over the Stringer Lady Red Devils to secure the 1A Fast Pitch State Championship in school history.

With the win, Myrtle has swept their entire postseason run and finishes the season with 25 straight victories en route to a 26-3 record.

“It was a long road back for us. We played for a title three years ago then thought we had a shot last year before things got shut down. These girls just went back to work and set a goal that they achieved together. I couldn’t be more proud of them,” said coach Brooke Gordon.

Both squads recorded 1-2-3 innings in the opening frame; however back-to-back hits from Kinzie Waits and Olivia Decanter in the second inning set up the Lady Hawks to take a 2-0, which they would never relinquish.

Jaycee Holifield and Hannah Buckley responded with back-to-back doubles in the bottom of the inning to get one back.

After that, Streich was locked in.

The Myrtle pitcher would not allow another run and thwarted two late scoring opportunities in the fifth and sixth innings to keep the lead for the Lady Hawks.

Heading into the seventh, Myrtle only clung to a 3-1 lead. However, Stringer pitcher Madilyn Graham’s pitch count continued to rise, and the Lady Hawks forced her exit.

The late scoring began with back-to-back singles from Kinsley Gordon and Waits. Streich proceeded to lay down an excellent bunt that allowed her to reach on fielder’s choice while also scoring Gordon from third.

“Caylie laid down a perfect bunt and I just knew we needed the run for insurance. It feels amazing helping this team win a title,” said Kinsley Gordon.

After the bunt, Breanna Smith scored another on an RBI single. Keragan McCullough followed with the hit of the game on a two-RBI double that opened the floodgates, forced Graham’s exit, and gave the Lady Hawks their final 7-1 lead.

McCullough led the way with three hits, including the double in the seventh. Gordon and Breanna Smith followed behind with two hits each.

Streich finished with 87 pitches, allowing only one run and six hits with six strikeouts.