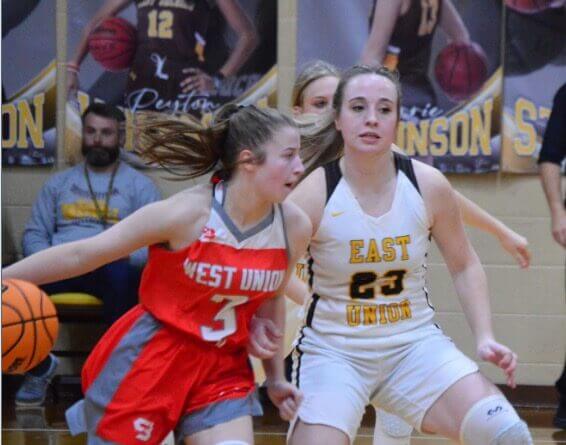 The opening game of the night provided great action as the West Union Lady Eagles used a fourth-quarter spurt to knock off the East Union Lady Urchins.

The game began low-scoring with no points scored nearly halfway through the first four minutes, but the Lady Eagles eventually put together a 9-2 run that gave them a lead through most of the first half.

However, after leading 17-14 at the half, the Lady Urchins put together a run of their own to take a lead midway through the third.

Both teams battled hard and swapped lead changes through the third, but it was Ella Kate Taylor with back to back three-pointers to give West Union a five-point lead at 33-28 that they would not relinquish again.

Zoey Wright led all scorers and the Lady Eagles with 16 points while Taylor added 11.

East Union was led by Jorja Roberson and Peyton Wildman, who both scored 15 points.

Despite falling behind early, the West Union Eagles used a strong third quarter to secure the season sweep over East Union.

The Urchins came out with a strong start and led 12-9 after eight minutes of play.

The Eagles responded constantly, but never found rhythm enough through the first half to hold a lead as the Urchins took a one-point advantage into the locker room at the break.

However, West Union ensured the third quarter belong to them as they used a 21-9 run throughout the period to take an 11 point lead at 44-33 with just eight minutes to play.

East Union managed 21 points in the fourth for their best offensive quarter of the game, but they failed to get enough stops to finish off the comeback effort as the Eagles prevailed by seven.

For the Eagles, Greer Manning led the way with 19 points.

West Union is back in action on Thursday with Senior Night against Falkner.

East Union hits the road on Thursday to face Wheeler.