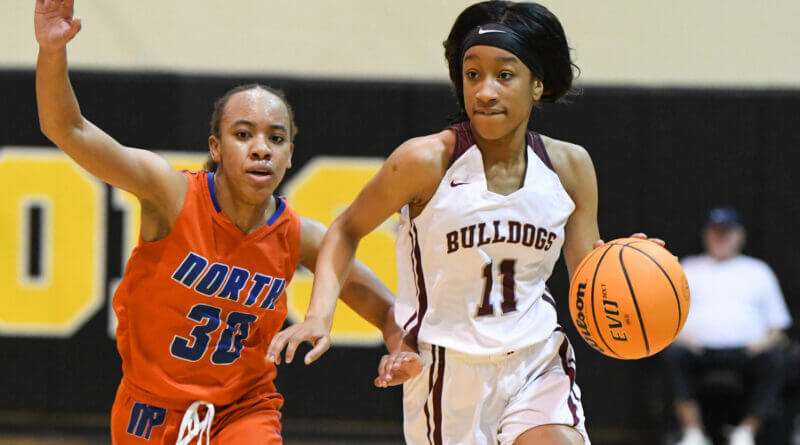 The matchup between the number four seed New Albany Lady Bulldogs and the number five seed North Pontotoc Lady Vikings was one of the most exciting games of the opening round of the Class 4A, Region 2 Division Tournament at Pontotoc High School Tuesday night.  Having split their regular season matchups 1-1, Tuesday night’s game could have gone either way, but a shaky first quarter start for the Lady Vikings proved too much to overcome, and the Lady Bulldogs advance to try and take down the number one ranked Pontotoc Lady Warriors Thursday afternoon after their 54-41 victory.

The Lady Vikings got on the board first courtesy of a rebound from Laura Cobb on their opening drive, but the Lady Bulldogs jumped into action quickly with Maguire Miskelly putting her skills on display early with six points back-to-back.

Between Miskelly and teammate Laniya Terry also putting up six points, the Lady Bulldogs finished the first quarter up 16-6.

The ferocity of both teams was easily visible, and fouls were abundant with the Lady Bulldogs hitting bonus territory at the start of the second quarter and capitalizing on 6/8 from the line, while the Lady Vikings struggled to connect completing only 2/5.

However, the Lady Vikings were able to connect outside the key, with Bindi Seale sinking 3 three-pointers to help cut the Lady Bulldog lead to just 27-21 going into the locker room at the half.

Miskelly put up two for the Lady Bulldogs to start off the second half, but the rest of the quarter would not follow suit, with the Lady Bulldogs only putting up six more points thanks to Madison McDonald.  The Lady Vikings took advantage of their opportunity sinking 13 points in the third, including another three for Seale and a three plus 2/2 at the line for Emma Burk.

The Lady Bulldogs looked like they would go into the fourth down, but a last-minute foul sent McDonald to the line where she knocked out 2/2 to put the Lady Bulldogs back up by one, 35-34.

The Lady Vikings finished the game with a second three for Burk to bring her nightly total to 10, second in scoring to Seale with 12.

Finley had the final basket of the night, cementing a final score of 54-41 as the Lady Bulldogs move on to round two.